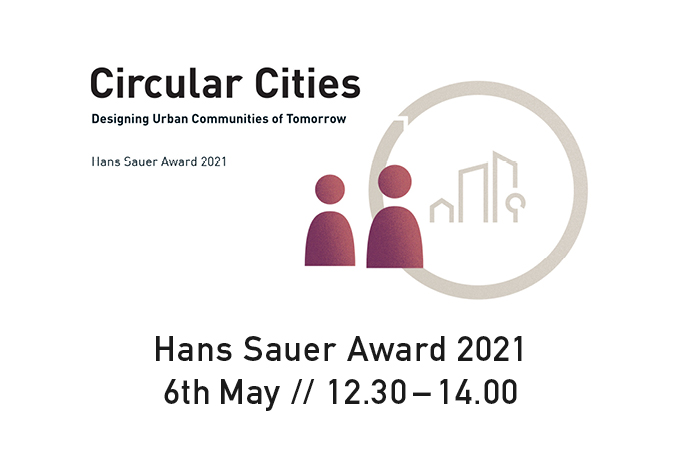 This year, the Hans Sauer Foundation is again going to present the Hans Sauer Award, which in 2021 focuses on „Circular Cities – Designing Urban Communities of Tomorrow” as the negative impact of the linear economic system is most noticeable in urban areas. Cities currently consume 75 percent of the extracted natural resources, produce 50 percent of global waste, and emit between 60 and 80 percent of all greenhouse gases. But, as not only the award shows: Cities also hold an enormous potential for societal transformation. For further information about the call, click HERE. The Award is endowed with 20.000 Euros in total and will be given out in three categories: Ideas, Strategies and Best Practice.

On the 6th of May 2021, from 12.30 am – 2.00 pm the projects will be awarded and introduced by the winners themselves via short video statements. Additionally, Valerio Barberis, Deputy-Major (Urban Planning, Environment, Circular Economy) for the Municipality of Prato*, will present a keynote about how Prato is becoming a Circular City.

The city of Prato – capital of the homonymous province – sits in the northern part of Tuscany (Italy), only 17km far from the region’s capital Florence, and it is near some of the most famous world’s cities of art: Bologna, Pisa, Siena. The city lies in a flat area along the valley of the Bisenzio river, an important tributary of the most famous Arno river. Furthermore, being located at the foot of the Apennines, the city is a gateway to nature.

Municipality of Prato (around 200.000 inhabitants) is famous worldwide for its textile district, which represents about 3% of European textile production. The Prato textile industry relies on the circular economy principles having historically based its industrial fortune on the reuse of waste from the textile process and on the reuse of second-hand clothing from all over the world. The recycling techniques of these fractions – that would otherwise be considered a waste – started at the end of the 19th century – and led to consider Prato one of the most innovative industrial city in Italy. With this mindset, part of the DNA of the City, Prato anticipates by decades a behavior that today is promoted by the “green economy” principles and the intelligent management of productive chains in the logic of Circular Economy. From the World War II onwards, Prato applied the principles of the Circular Economy beyond the industrial sector towards other areas of activities, such as the natural and built environment. In recent years, the theme of recycling textile waste is increasingly present in the fashion industry. The goal is bringing worn fabrics, called “rags”, back to new life, is in fact part of the concept of Circular economy and Ecodesign. In what way? Through the enhancement of a textile production that takes into account the life cycle of each product, reducing as much as possible the environmental impact. This is how virtuous projects for the production of regenerated fabrics are born.

What are the benefits of generating new fabrics from rags? First of all, the preservation of the planet’s natural resources, thanks to the reduction of raw materials, water, and energy consumption. Not only that, because by recycling and reusing materials already processed, it is also possible to reduce the use of dyes and chemicals, as well as the emission of carbon dioxide. In this way, the development of the circular economy is promoted by opposing the linear economy system. Recycled fashion is the future of an industry that increasingly focuses on the concept of Sustainability. The main phases of the recycling process of fabrics are three. The first is the recovery of the rags. This means the collection of used fabrics from used textile scraps or garments. The second is the processing: the rags are divided by color and type, then giving life to the process that transforms them into regenerated raw materials. Then begins the third phase of the “new life”. The regenerated raw material is in fact the starting point of the production process that generates a new fabric. The companies of the textile district of Prato, for years, represent a virtuous example of valorization of textile recycling. A model that has been followed by many other Italian companies convinced that the transformation of rags into new fabrics represents the future of the sector.

One historical example is related to the waste water: Prato was the first industrial district arranging a close water cycle so to be able to reuse the waste water more than one time and to clean it before giving back to the environment. A system, which led to significant results in terms of green infrastructures and green economy and that has been studied, promoted and copied: since the early 1980s the Prato district has been a case study to investigate innovative environmental recycling dynamics.
More recently, Prato developed another application of the Circular Economy approach to limit and reuse the waste produced from the construction and demolition of buildings. Although many materials are recyclable or reusable, reuse and recycling rates vary widely within the EU and -in terms of volume- the construction and demolition waste is still among the major sources of waste produced in Europe.
The Circular Economy in Prato also means the reuse and the transformation of existing buildings (“Rethinking the City”), in particular those of the industrial areas, with the logic to: a. create new economic and social opportunities without consuming new resources and green land (following the paradigm of the „zero volume“ growth); b. improve the environmental performance of buildings and infrastructures in their entire life cycle; c. propose new urban scenarios in line with the most recent Regional Legislation addressed to the limitation of agricultural land consumption.